SNL
Surprise! Eminem Makes Cameo in Pete Davidson's 'Stan' Parody on 'SNL'
Move over, Stan! Pete Davidson parodied Eminem‘s hit single “Stan” by turning it into a dark Christmas anthem — and even the Real Slim Shady got in on the action. Davidson, 27, starred in the faux music video, which aired on the Saturday, December 5, episode of Saturday Night Live, as a Santa Claus-obsessed fan […]

SNL
Pete Davidson Jokes About His ‘Modest Bulge’ on 'SNL'
BDE makes a comeback! Pete Davidson poked fun at his “modest bulge” during a Saturday Night Live skit on Saturday, October 31. The comedian, 26, made the joke during the “New York Musical” sketch, which featured Davidson and Chris Redd browsing in a Times Square souvenir shop run by John Mulaney. Davidson asks to try […]

LOL
Nelly Shares His Thoughts on Saturday Night Live’s ‘Missing’ Rapper Diss
No harm, no foul? Nelly has a thing or two to say about Saturday Night Live’s recent jab about him being a “missing” rapper. “I wouldn’t even call it a diss because I mean, I have been away as far as with my music. So, I mean, you know, you’re on SNL — I think […]

SNL
Hidden Talent! Adele Reveals Her Impressive American Accent on 'SNL'
Back in the limelight! Adele kept the laughs coming — and showed off her American accent — in a promo ahead of her Saturday Night Live hosting debut. The “Hello” singer, 32, was joined by H.E.R. and Kate McKinnon in her first public appearance since her massive weight loss. The trio wore black face masks, […]

LOL
Colin Jost Jokes About Michael Che Objecting at Scarlett Johansson Wedding
Cooking up a hilarious scheme? Colin Jost said he’s totally on board to have Michael Che object at his wedding to Scarlett Johansson. During an appearance on The Ellen DeGeneres Show on Thursday, March 15, host Ellen DeGeneres asked Jost if he is aware of Che’s plans to “make a scene” at the engaged duo’s […]

Love Lives
Michael Che Teases Involvement in Colin Jost, Scarlett Johansson’s Wedding
Dishing on their big plans! Michael Che gave an update on his pal and Saturday Night Live costar Colin Jost’s upcoming wedding to fiancée Scarlett Johansson. During an appearance on The Ellen DeGeneres Show on Monday, October 12, host Ellen DeGeneres asked the SNL writer, 37, whether he will be in the engaged couple’s wedding. […]

SNL
Pete Davidson Slams J.K. Rowling for 'Disappointing' Transphobic Comments
A disappointed Potterhead. Pete Davidson criticized J.K. Rowling for her past transphobic comments, which impacted how he feels about his Harry Potter tattoos. The King of Staten Island star, 26, responded to Rowling’s “very disappointing” remarks during the “Weekend Update” segment on the Saturday, October 10, episode of Saturday Night Live. “I long for a […]

TV
Colin Jost and Michael Che: SNL’s COVID Table Read Felt Like a Podcast
Sign of the times. Colin Jost and Michael Che opened up about how Saturday Night Live kept the laughs coming for the show’s first in-person table read amid the coronavirus pandemic — from a safe distance. The Saturday Night Live stars appeared on the Thursday, October 1, episode of The Tonight Show Starring Jimmy Fallon […]

TV
Pete Davidson, Kate McKinnon and More Return for SNL's 46th Season
Getting the gang back together! Pete Davidson, Kate McKinnon and more Saturday Night Live favorites are set to return to the show when its 46th season premieres in October. On Tuesday, September 15, The Hollywood Reporter confirmed that the NBC sketch comedy series will not be adding any new cast members this fall. For the […]

Movies
Happy Birthday, Adam Sandler! Take a Look Back at His Best Movie Roles
Adam Sandler is an industry icon for a reason. The comedic actor’s decades-long career has seen him charm audiences in everything from Happy Gilmore to The Wedding Singer and gained a whole new generation of fans thanks to the animated Hotel Transylvania franchise. Sandler first gained major recognition when he became a cast member on […]

Emmys
Emmys 2020: Brad Pitt Scores Nomination for Playing Dr. Fauci on ‘Saturday Night Live’
Brad Pitt clearly made an impression on Emmys voters this year. The two-time Academy Award winner was nominated for his brief Saturday Night Live cameo as Dr. Anthony Fauci. Fauci, 79, stated on CNN’s New Day in early April that he wanted the Once Upon a Time in Hollywood actor, 56, to portray him on […] 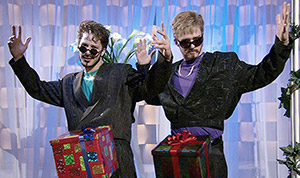 TV
Stars' Funniest 'SNL' Moments: From Alec Baldwin to Cameron Diaz
Take a look back at some of Saturday Night Live's most laugh-out-loud sketches

TV
Watch Pete Davidson and Adam Sandler Unite for an 'SNL' Quarantine Anthem
A dynamic duo! Pete Davidson and Adam Sandler teamed up to perform “Stuck in the House” — a relatable song about the coronavirus quarantine — on Saturday Night Live‘s second “At Home” edition.   The Big Time Adolescence star, 26, and Sandler, 53, sang about the doldrums of quarantine on the Saturday, April 25, episode […]

TV
Watch Brad Pitt Portray Dr. Anthony Fauci In Surprise Cold Open on 'SNL'
Dreams do come true! Brad Pitt paid tribute to Dr. Anthony Fauci on Saturday Night Live‘s second “At Home” edition, just weeks after the physician joked he wanted the star to portray him. “First, I’d like to thank all the older women in America who have sent me supportive, inspiring and sometimes graphic e-mails,” Pitt, […]

In Memoriam
Cecily Strong Pens Heartbreaking Essay About Late Cousin's Cancer Battle
Opening up. Saturday Night Live star Cecily Strong spoke from the heart about the pain of grieving while social distancing and the challenges of navigating a new relationship amid a pandemic. The 35-year-old comedian reflected on the loss of her cousin Owen, who was battling an aggressive form of brain cancer, in a personal essay […]

TV
Pete Davidson Reunites With ‘Saturday Night Live’ Costars Amid Quarantine
Together again! Pete Davidson joined his Saturday Night Live costars for a virtual reunion amid the novel coronavirus pandemic. The season 45 stars caught up through a Zoom video call on Thursday, April 9. In a photo from the chat, the 26-year-old Big Time Adolescence actor smiled from ear to ear. He also gave a thumbs up. […]

News
Dan Crenshaw Reacts to Pete Davidson Saying He Was ‘Forced to Apologize’
Rep. Dan Crenshaw said it’s “a little sad” that his name is still linked to Pete Davidson’s, after the Saturday Night Live star revealed he was “forced to apologize” for a 2018 joke about the politician. “It’s like our comedic careers are joined at the hip because he can’t stop thinking about me,” Crenshaw, the […]

News
Pete Davidson: I Was 'Forced to Apologize' After Dan Crenshaw Joke
Sorry, not sorry! Pete Davidson walked back his public apology to Representative Dan Crenshaw more than a year after mocking his appearance on Saturday Night Live. Just before the 2018 midterm elections, Davidson, 26, received widespread criticism for joking about Crenshaw, 35, who lost an eye while serving in Afghanistan six years earlier. The comedian […]

MENTAL HEALTH
Pete Davidson’s Mental Health Battle in His Own Words
Pete Davidson has been open about his mental health battle since being diagnosed with borderline personality disorder in September 2017. The Saturday Night Live comedian hasn’t shied away from sharing his experience with fans in the hopes that his journey can be helpful to those in similar situations. Davidson — who made headlines in December […]
Next